A MOSFET mu-follower for headphone listening.

This circuit comes from the original article on the mu-follower by Alan Kimmel:

It's a triode voltage amplifier with a MOSFET constant current source (CCS) as the plate load. The MOSFET also provides a low impedance, relatively high current output for driving the headphones.

The output stage is made up of the MOSFET, Q1, configured as a source follower with R5 as the source resistor. The headphone load is connected through the coupling capacitor C3. This part is essentially a Szekeres headphone buffer. The gate of the MOSFET is driven by the plate of the triode, V1, through the coupling capacitor, C2. The triode is a simple voltage amplifier. The plate resistor R3 is tied to the MOSFET source in a constant current configuration, rather than to the B+ directly, and this innovation is what makes it a mu-stage circuit. R3 borrows some of the MOSFET's strength to increase it's effective resistance, lowering distortion in V1. The tradeoff is the MOSFET source has to sit at the plate voltage, more or less, so the source resistance R5 dissipates a lot more power that it would otherwise. This is an inefficient circuit.

The gain of the circuit is defined by the mu of the vacuum tube. This will be about 20 for the 6SN7-6CG7 family. The output impedance will depend mostly on the transconductance of the MOSFET, its about 10 ohms with the 2SK213. The output power depends on the value of R5, the power supply voltage, and the headphone impedance. It's about 40 mW (<1% distortion) into 300 ohms, only 10 mW is available into 32 ohm loads however. The heat dissipated depends on the value of R5 and the power supply voltage. Its about 5 Watts, not including the tube filament.

As shown by options A, B and C in the power supply diagram below, a low-ripple B+ voltage can be achieved by conventional RC filtering, an inductor, or a MOSFET line smoother.

There is obviously a lot of flexibility in the design of the power supply. It can be true dual mono, or some of all of the components can be shared between channels. If the power supply is dual mono the filter capacitance values can be halved.

With AC filament heating a transformer with a center tap or two 3.15 V secondaries should be used for hum cancelling. DC heating can also be used.

I designed a circuit board to accomodate most of the parts. The triode and the grid and cathode resistors are off-board and wired point-to-point. The Eagle .brd and .sch files can be downloaded here. They are my working files, so the values shown do not exactly match the published schematic. Note that the IRF510 and 2SK213 are not pin-compatible, and that this board is drawn for the 2SK213. 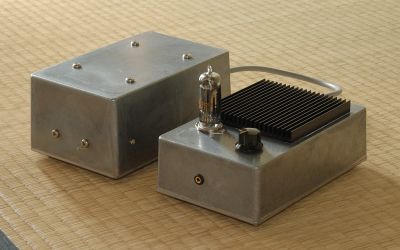 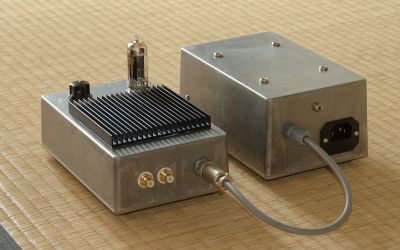 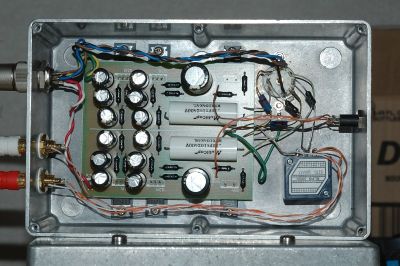 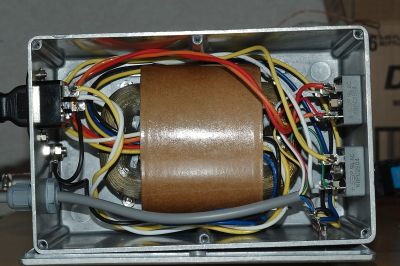 The photos show the ALPS volume potentiometer which was replaced later with a stepped attenuator. The cathode bypass capacitors were not installed at the time the photo was taken, but added later.

The transformer was custom made for me by Pheonix Corporation in Japan. It is R-core type, 80 VA, with 2x60VAC-0.4A and 6.3VAC-1A C.T., and comes with an electrostatic screen. The transformer and diodes were configured as an a outboard power supply, while the filter capacitors and line smoother were with the rest of the amplifier circuit in the main case. The power supply umbilical was made from seven conductor unshielded cable, with a small 7 pin bayonet connector on the amplifier side. Electrolytic capacitors are Black Gate Std. Coupling caps are Multicap PPFXS. Resistors are mostly Holco, with Riken Ohm and Caddock for the cathode and source resistors, respectively. Cast aluminum cases are made by Hammond Mfg.

Here is the complete circuit diagram, configured more or less as I built it: 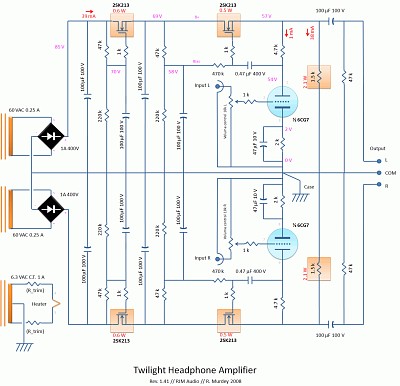 C1 and C2 affect the sound quality generally as well as the bass response. I personally prefer slightly smaller values than those listed. Although this limits the bass response I found the overall presentation is better balanced.