This is an elaboration of a well-known and classic op-amp topology for phono preamplifiers. The limitations of the circuit are discussed, and hints given on how to best optimize it for maximum performance.

Originally sourced from the OP606 datasheet, where it is attributed to Walter G. Jung. The circuit can be used as-is without further modification, but I have tweaked it slightly for the version shown here. 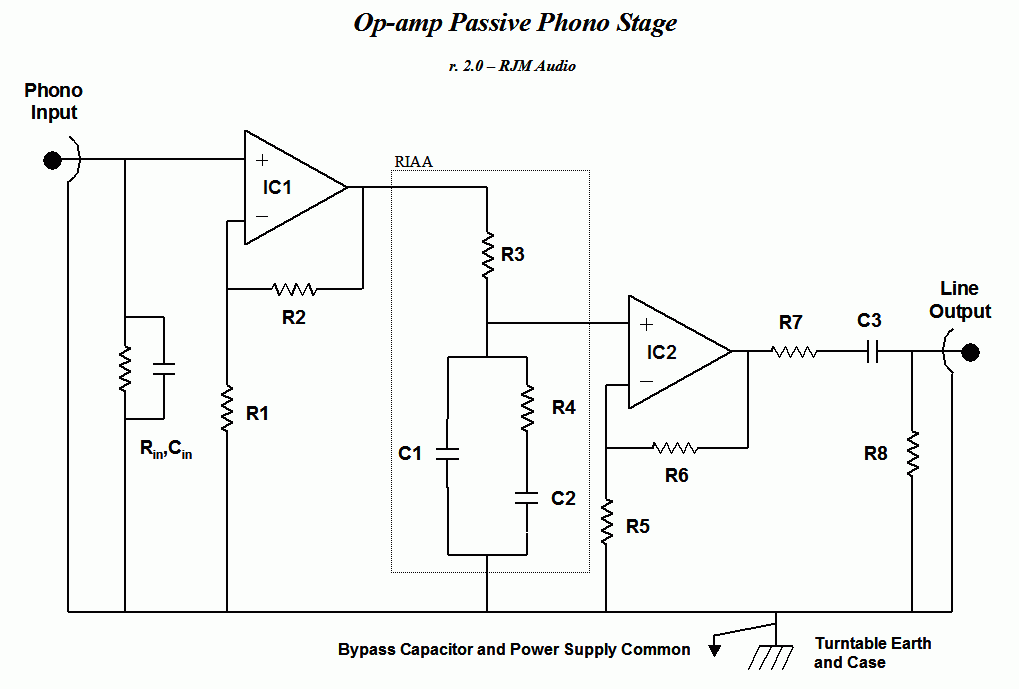 RIAA values shown in bold. The exact values listed above theoretically give a response accurate to ±0.01 dB. To even approach that the RIAA resistors and the gain determining resistors R1, R2, R5, and R6 should be 1% types or hand matched to within that tolerance. The capacitors must be hand picked to the same 1% tolerance with the help of an accurate meter. In practice deviation up to 3% is accpetable, especially if it is consistent between channels.

An additional, often cited, problem with the circuit is the lack of voltage headroom in the first stage.

In comparison the VSPS doesn't suffer from any of these issues. Its simpler and cheaper, and recommended if you are looking for an op-amp phono stage for moving magnet cartridges.

Those dead-set on passive equalization - and don't want to use tubes, which at least don't suffer from the grounding and headroom issues - read on.

The circuit is optimized by fine-tuning the gain and the impedances, choosing the right op amp to match, and finally getting the ground layout right.

There is relatively little room for tweaking the component values. I reduced the gain of the first stage slightly from the 34 dB to 30 dB and increased the second stage from 26 dB to 30 dB to compensate. This was done mainly to improve the headroom slightly. I increased the resistances R1, R2, R5 and R6 considerably. This will make the circuit easier to drive and argueably better balances the impedances on the non-inverting terminals, but may also increase the noise floor slightly depending on the op amp used. The passive equalization circuit can be rebuilt with any multiple of the values listed, with proportionally higher or lower input and output impedances. Higher impedances generate more noise at the input of the second gain stage but are easier for the first stage to drive. I stuck with the original values, these seem a good balance. This input impedance of the RIAA network is 8 kohms and the output impedance about 800 ohms in the midband.

I chose the OP27 for both the input and output. This is a low noise, precision op amp with bipolar inputs. Its cheap, readily available and I've used it with good results in the phonoclone. FET input, audio op amps like the OPA134, OPA606, and OPA604 can also be substituted. This circuit can also be built using a dual op amp. The OPA2134 and NE5532 are both appropriate.